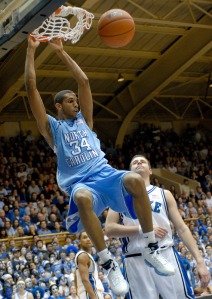 The Tar Heels outlasted an emotional but ultimately over-powered Duke team in Cameron Indoor Stadium tonight — sending thousands of blue-painted privileged kids out into the chilly Tobacco Road air with yet another home loss on their record in the ACC season.  Yeah, too bad for them.

As a proud Tar Heel alum, I've been following the season with interest this year, but haven't really felt the need to comment on many games.  As always, the match-up with Duke is always one to pay a little extra attention to.

I'd hoped for a Tar Heel whitewash — UNC is considerably more talented than Duke this year.  But the early minutes when Duke came out of the gates draining basket after basket, you knew this was going to be one of those games.  Down by 10 early in the 2nd Half, the Heels steadied the ship and began chipping away at the Blue Devil lead finally taking the lead with about 5:00 to go.

I've observed that on several occasions this year, the Heels have let opponents get out in front of them only to fight their way back — sometimes successfully, sometimes not (see VaTech, and NC State games).  Let's hope they can shake that by the time ACC and NCAA tourney time comes around.

Send to a friend

4 thoughts on “That Lovin’ Feeling: Tar Heels Down Duke”