Odd that on a day where the QotD asks for your favorite fiction book, that I’ve been inspired to write about one of the few non-fiction books that I read last year. 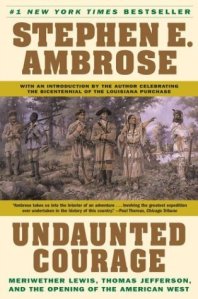 Undaunted Courage: Meriwether Lewis Thomas Jefferson and the Opening of the American West

The book is “Undaunted Courage” by Stephen Ambrose (who also wrote “Band of Brothers) – it is a history of the Lewis & Clark expedition.  I don’t read a lot of non-fiction, I typically like to use books for escapism and entertainment.  This book however is a great read, and anyone that’s curious about why America is the way it is should read it.

President Jefferson had commissioned the exploration of the Louisiana Territory, which the United States had bought on the cheap from Napoleon in 1803.  Jefferson was a renaissance sort of guy and he wanted multiple things from the trip in terms of commerce, politics and scientific discovery. 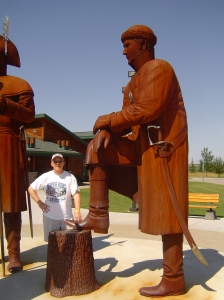 In 1804, Meriwether Lewis and William Clark and a group of ~40 men set off from Saint Louis (hence the whole Gateway to the West shtick) up the Missouri.  By all of Jefferson’s goals, the expedition was somewhat of a failure.

Water route:  Yeah, the Rockies were kind of a drag especially when they realized they were going to have to CARRY ALL THEIR STUFF ACROSS THEM!!

Indian diplomacy:  The Corps of Discovery (as the expedition was known) made a few friends, passed most without incident, but were unable to sway either of the likely powerful enemies (Sioux and Blackfoot mostly) to the American way of thinking.

Scientific discovery:  Here they were remarkably successful.  Clark’s map of the upper Missouri was one of the most important strategic assets for the US in the years following the expedition, and Lewis made countless descriptions of plants and animals unknown to Anglo-Americans.  Unfortunately, Lewis never quite got around to publishing his findings (which frustrated Jefferson to no end).

Recently, there was an article in Slate that said that L&C didn’t really matter all that much because everything that they did was more or less inevitable, which is like saying its no big deal that Neil Armstrong walked on the moon in July of 1969, because someone would have done it soon after anyway.  That sort of reductionist analysis doesn’t begin to address how amazing their story was.  Those guys went 4000+ miles out to Oregon and back (over 2 years and 4 months), and they lost ONE GUY.  They were in strange territory, couldn’t speak most of the languages, had to scavenge for food (or rely on natives for bartering and occasionally charity).  Similar expeditions up much less imposing rivers all had to turn back early for various reasons.  Lewis and Clark rocked.

Oh – so why am I thinking of them today??  Because the Beloved and I are about to set out on our own Expedition of Discovery.  We’re beginning her move from Santa Fe back to San Diego and I’m flying out tomorrow, and we’re going to take a long weekend, drive us back in her car with her dog, and enjoy the trip through the Southwest.  Some comparisons between their expedition (L&C) and ours (B&B = Betz and Beloved): 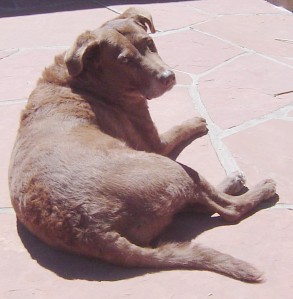 I’ll be off the grid starting midday tomorrow until Sunday, so I hope everyone has a good end to the week!