I was speaking last night with one of the interns in our group.  She was very excited.  Her excitement centered on getting to cast her vote in her first Presidential election.  We talked about different elections and I started thinking back to the first time that I was able to vote for President.
I, too, was excited.  The candidate leading in the polls was a fantastic orator.  Most people presumed that he would win.  He was immensely popular and people thronged to see him and cheer him on.  His running mate was a hard-working party loyalist that seemed comfortable in the Number Two role.
His opponent had an uphill battle.  He was an honorable, long-serving US Senator.  A decent man, long-known in his party.  Old school.  He wasn’t doing so well in the polls and clearly lacked the charisma of his opponent – so he decided to “shake things up” by nominating a largely unknown woman as his running mate.  That gave the ticket some cachet for a bit, but in the end, it wasn’t even close. 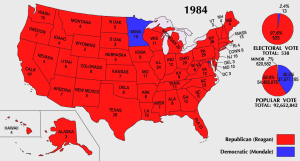 1984 EV map — Hi Mello!
I hadn’t thought about the commonalities between 1984 and this election – which I would have said were completely dissimilar.  She’d never known the Reagan years.  We both left that conversation with things to think about.  I suppose, it’s good to talk to someone of a different generation from time-to-time.

9 thoughts on “(Election) Morning In America”