The Eagles took advantage of another Giants turnover-turned-into-TD and had a couple of good drives to keep the game close, but the Giants were able to dominate the game overall – they had the ball for 39 minutes and rushed for over 200 yards.  I’m sure on the Giants sideline they were scratching their heads wondering why they weren’t up more. 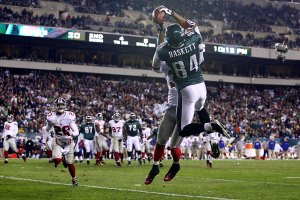 And yet, the Eagles still had a chance to win – they had the ball with ~4 minutes remaining, and after a baffling choice to let the clock run down to the two-minute-warning, the Eagles displayed their calling card all season – failing to convert for short-yardage on 3rd and 4th down, sealing the game for New York.

And so, rather than be a game behind and battling for the NFC East, the Eagles find themselves at 5-4, tied for last with the Cowboys.  But I really think they're where they ought to be — a better-than-average team that might or might not make the playoffs.  Nothing more.  Nothing less.