One of the other things I missed getting to post about while I was on vacation occurred on the day we flew to the east coast.  In a move shocking to many, the Philadelphia Eagles signed Michael Vick as their back-up QB.  Certainly, I was surprised and the headlines were in a pretty large font as we disembarked at Philadelphia International Airport.  And the following day, this shirt was already making its debut on the local scene. 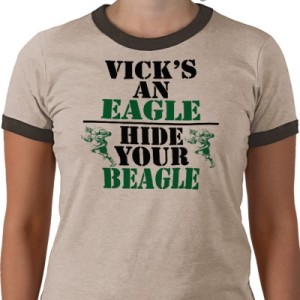 Vick is due to play in his first pre-season game tonight in what I can only assume will be a media free-for-all.  Several folks have asked me over the last couple of weeks how I feel about Vick playing on “my” team.    From a team perspective, this is a lot more about Donovan McNabb (who wants a back-up that doesn’t want his job just yet) more than Vick.  And I’m sure Andy Reid has all kinds of crazy formations in mind with them both on the field. 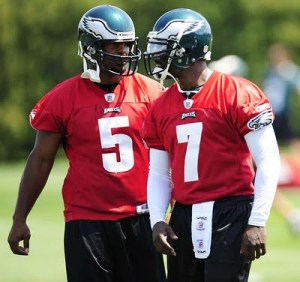 Anyway – that doesn’t really answer the question of should they have hired him…. well — as sort of a law and order type of guy, I believe that Vick in pleading guilty and serving his time has every right to seek employment in the NFL now that his sentence is complete.  In some ways, you can argue that his slate’s clean and there’s no reason not to root for him.  And in others, you can say the guys a dirtball felon that willfully killed dogs and should never ever be able to bring in the big bucks from the NFL—and that hiring him somehow condones his crime.

In the end, I feel like he paid a fair price and should be allowed to play.  He’s said and done all the right things with animal protection services since his release and so on the surface, I say give him a chance.  Think of it like parole — as long as he’s on the straight and narrow, he’s on the right track.  I just don’t think I’ll be buying and wearing his jersey anytime soon.

Would You Wear It?

Oh, and Penny says she respectfully disagrees and may have to root for the Redskins this year.

22 thoughts on “Vick-tim of Circumstance?”