Today, the NIH announced that they are spending $27MM of your Recovery money on creating a social network for scientists in the biomedical research community.  You can read about it here.

The goal is summed up as follows:

These Web-based initiatives will bring the power of Internet-based tools, as exemplified by social networking, to biomedical research. Modern technologies for communication and collaboration have the potential to enhance interdisciplinary research, enabling individuals to connect with each other and with resources — irrespective of location — to address challenges in new ways.

That’s very nice – but I wonder if this is really necessary?  Frankly, most of the social networks among scientists that I know involve a couple of pints.  And though I don’t want to be a Luddite, I wonder if it can be successful.   Do I really need a social network to help me solve scientific problems of a common sort (Hey peeps, I’m out of ammonium sulfate, anyone in 92121 got any in da house?)?

Because I’ll tell you, the first thing that popped into my mind when I heard about this was two little letters: “I” and “P” as in Intellectual Property.  The who “owns” what question is always a contentious issue that plagues researchers from the — whose name gets to go on a paper, or whose name gets to go first on the paper questions on the academic side – to the industry ones of who had an intellectual contribution worthy to be on a patent to which organization owns the rights to this new discovery and can license it out to the highest bidder(s)?  Can you imagine “Hey peeps, I’m looking to cure Parkinson’s Disease with this new compound I made, anyone got a validated preclinical animal model in da house?”  Somehow I don’t think so. 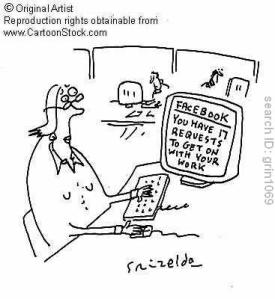 I think this also raises the question of how many social networking sites do you really need?  I have three that I can think of – Facebook, Vox and LinkedIn – which seem to adequately cover the personal and professional sides of life.  I’ve eschewed Twitter because I think it only enforces America’s short-attention span problem.  Though I did just get a GoogleWave test-account (thanks, DeWitte!) – and I’m not really sure how to classify that.  So – is this new endeavor supposed to be a less “career networking” and more a "work networking" site than LinkedIn?  Perhaps.

I’m sure being supported by the government, they’ll come up with some terrible name out of committee – NerdNet, Science Communication And Networking Tool (SCANT), Fritter?   Maybe the social network itself should organize and name itself.

What do you guys think?  Good idea, bad idea, I'm not a scientist so who the heck cares and I want my $27 mil back?

19 thoughts on “What Would You Call a Social Networking Site for Scientists?”