We’ve had a decorating issue at The Aerie for a while.  In the living room (piano room or whatever you want to call it…), we’ve had a couple of small prints.  Which isn’t much of a problem — they're a little too small for the room, except that the other part of the room has two mirrors and the dining room has two prints.  Too many twos… 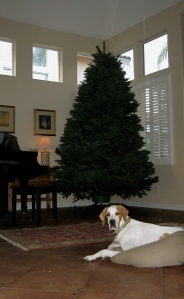 Not Quite Sure
You can see them in the above photo…so – we’ve been looking for a big-ish painting that would blend in, but not overpower the room.  Think maybe something Rothko-like, without the Rothko prices.  And we’ve been spectacularly unsuccessful at it for the last year or more.  Everything we see is too big, or too small, or not right with the tile, etc.
So, while we were in New Mexico in October, we had one of those in-room local magazines.  This one happened to be New Mexico Magazine and it had a photo contest and while we were flipping through it, we noticed one of the winning photos:

Black Mesa and Church
We both really loved this photo* and loved the composition and colors.  Northern New Mexico is still incredibly important to us – mentally, emotionally, spiritually – and this photo really captured something.
The photo shows a small church situated before the looming Black Mesa, which is the sacred mountain of the San Ildefonso Pueblo (no one is allowed to tread on it) just northwest of Santa Fe.  It’s one of the more striking elements in an area full of fascinating geological formations and it captures the juxtaposition of the two cultures, two religions and much of New Mexico and what it means to us.
When we returned from our big trip over the holidays, we looked up the photographer (Michael Mudd) and ordered the print.  It should arrive soon and hopefully after getting matted and framed it will find its right place in our home.
* this is a low-res version that I could cut-paste.