So, this month I have been on-call for Federal District Court jury duty.  It’s not so bad, you don’t have to report unless you’re called in and you can check each week online.  I was actually on-call last February too but never had to report.  Every time  I've checked in the message it was: "Check in again next Sunday after 6 pm to see if you need to report the following Monday".  I had never seen the Federal courthouse.  It's been like a running joke here.
Well, not anymore.  Last Sunday, I received the “Report at 7:30 a.m. on Monday to…” and the adventure was on.  I have to say the Federal process was a lot like the local one, except that the facilities were nicer.  And there were pictures of John Roberts hanging around.  I have been seated for a case (which of course I can’t say anything about) that should take about a week. 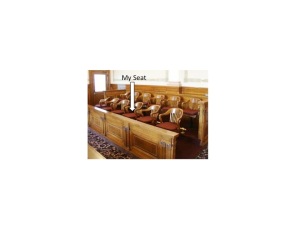 New Place to Hang-out
Some observations:
I’m a sucker for inspirational videos.  Maybe it’s me, but the introductory video that featured commentary from Chief Justice Roberts and Justices O’Connor and Alito made me want to make sure that I covered my part of the process.  One quote from O’Connor was, “Sure jury service is inconvenient, but sometimes so is the First Amendment, but we’re all glad we have it.”
The Fed has clearly adopted a get tough policy on people that claim they "too busy" for jury duty during the question-and-answer period.  His Honor's answer to a couple of entreaties like that was pretty much "Tough @#$&!" — actually, it was "That's fine.  If you'd rather schedule a better time when you can use your vacation to fulfill your jury service, we can arrange that."  Awesome.  Oddly no one took him up on that.
Many people are clueless.  In the packet that was mailed to us at the beginning of the month were instructions about where to go to park for free – a pretty good deal considering parking rates in downtown San Diego.  During check-in, I would say more than a third of people parked somewhere else because they “didn’t read the directions”.
I live in a bubble.  During the prospective juror Q&A, one of the questions is: have you or anyone in your family been convicted of a crime?  I was amazed at the number of DUIs, drug offenses and worse (I mean, who doesn’t have a money laundering uncle?).  I mean, it had to be like every other person.  Wow – there really is a whole side of the community that I don’t see.
Should be really interesting!