This weekend the Beloved and I shook off our lingering malaise of the last couple of weeks to head up to the City of Angels to eat some grub and catch some football.  You see, the Beloved is a proud alum of the University of Virginia, and their football team was traveling across the country to take on the Trojans of USC and the Wahoos (or Cavaliers as they are officially called) were having a big Western reunion.

After a stop at the Beverly Hilton (tres swank) to say hi to and listen to remarks from the new University of Virginia president, we headed over to the restaurant Craft, which some of you may know is run by Top Chef co-host, Tom Colicchio. 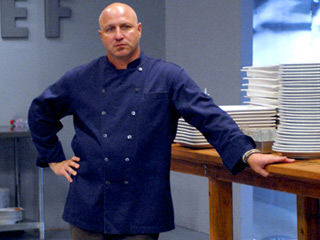 Now it’s always funny going to a “celebrity chef” establishment, because after a while, you’re not sure if the notoriety is from the “celebrity” or the “chef”.  Well, we can report that Craft delivered on all fronts.  The evening started with a cocktail from their thoughtful “mixologist”-derived menu.  The real star – as it should be – was the food.  The restaurant’s premise is to get the best, fresh, organic ingredients and prepare them perfectly.  And they did and they were.

Another high point was the service – which was incredibly efficient and friendly.  We were talking with one of the servers and were discussing with her whether they’d had trouble getting pine nuts (our salad had pine nuts and we’ve had a tough time finding pine nuts this summer) – she said no, she didn’t think so and then disappeared into the back.  A few minutes later, she comes by and delivers a little bag of pine nuts for us. 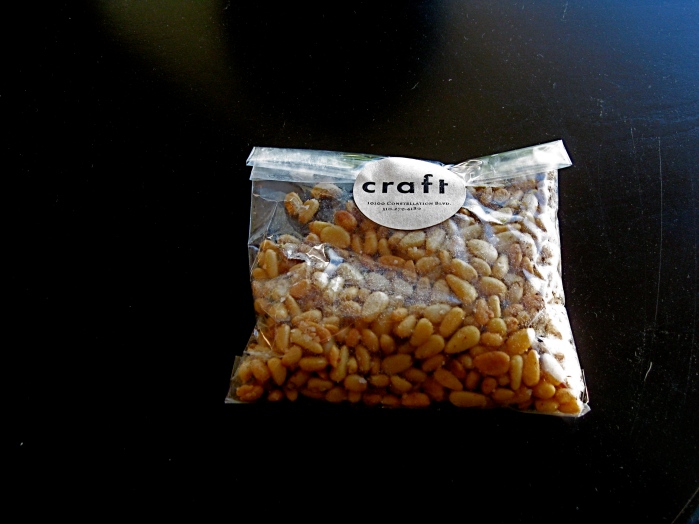 On Saturday, we laid low to conserve our energy for the evening’s game, having arranged to meet a friend that is an SC graduate on campus for, in her words, “a little food, a little wine and a little people watching”.  Well, whatever I was imagining was dwarfed by the absolute spectacle of the party that was in full swing when we arrived.  We got there nearly four hours before game-time and walked into the middle of a sea of crimson and gold – and beer, and food, and beer and people and beer that had clearly been going for hours and hours.  Wow. 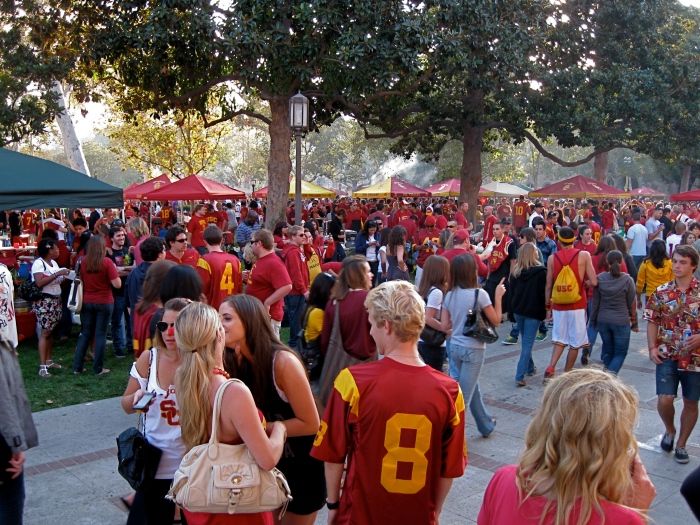 We were able to find out friends and carve out a shady spot on the steps of one building and sat, ate, chatted and just watched the parade of humanity.  And it just wasn’t (current) students – there were clearly multi-generational families enjoying the day.

About an hour before kick-off, the USC marching band showed up nearby to play the fight song and lead everyone en masse to the LA Coliseum (which is pretty awesome, I have to say).  We sat with the Virginia contingent (naturally tucked in an endzone corner!), which was preparing for a drubbing by the perennial powerhouse Trojans.  Well, guess what?  It didn’t happen.  In a sloppy, mistake and penalty choked game, the Cavaliers held their own, finally falling 17-14.   A couple of plays go a different way, and they might have sent close to 100,000 people home unhappy.