One of the classic plot devices in horror movies is isolation.  The protagonists (or victims, whatever you want to call them) are in a terrifying situation because they’re alone, with little or no chance of calling for or finding help.  Think “The Thing”.  Think “The Shining”.  Heck, even movies we’ve already talked about like “Vacancy” or “The Strangers” rely on the bad guys isolating their targets – because face it, it’s just not as scary if you can dial 911.  (Actually, it can be scarier if you can call for help and it doesn’t matter, but I digress…)

Author Scott Smith used isolation to great effectiveness in his novel “The Ruins”.  In it, four friends just out of college are partying in Mexico and decide to get away from the same-old same-old of the resort and go see some nearby ruins.  As you might imagine, this turns out to be a Bad Idea and there’s all sorts of red-flags associated with it, but being young and not-very-wise, the crew plows on. 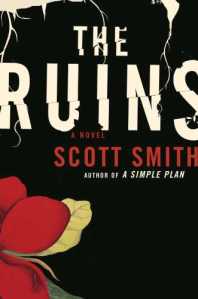 The friends (and a hanger-on from the resort that wanted to go along) get to the vine-covered ruins of an Aztec-ish pyramid after a fairly arduous journey.  Upon exploring it, they are “quarantined” on it by gun and bow-wielding locals.  Then, Really Bad Things start to happen.  Because you know what?  Those vines aren’t just there for show.

In his previous book, “A Simple Plan”, Smith explored the psychology of greed and disintegration of personal relationships after some friends make some bad choices (it’s a great book if you’ve never read it).  In “The Ruins” there is a similar proposition:  the friends make some bad choices and get into a bad spot.  We begin to watch them crack – both individually and communally – from both a physical (they have little water and food) and mental standpoint as things go from bad to worse to… worse than worse.  It’s a really great, creepy mix of horror and psychology.

And I would love to say that film version captures the isolation and psychological horror of the story effectively.  But I can’t.   Two things missed the mark in the movie: first, they focused too much on the physical horror and not enough on the psychological stress and friends’ relationships unraveling.  Second, the movie is too short.  Part of the effectiveness of the book is that Smith covers the down time – the worrying, the dread, the hopeful-to-hopeless cycle of not being able to get out of their predicament – and punctuates that with short bursts of action.  The filmmakers move the story too quickly – cramming parts together so that is seems like the friends are being knocked around like ping-pong balls and never get to really reflect on their situation.

Still, as a straight-up horror flick, it mostly works  — it’s just too bad about the missed opportunity.

Now if you’ll excuse me, I have to throw out all our houseplants.