This morning, I was driving up Torrey Pines mesa, blowing past some Prius that was gamely working its way up the incline when I noticed it had one of those little “Darwin Fish” badges.  You’ve seen them, they look like the “Jesus Fish” badges except they have little legs.  Clever.   Anyway, while leaving him in my fossil-fueled dust, it reminded me of a story that I’d been meaning to post about for a bit.

In a recent issue of “Biology Letters” there was a paper led by a group at Texas A&M that described the changes in a subpopulation of the Atlantic molly (a small fish) that lives in a cave in Mexico.   It turns out that for centuries, the Zoque people take a spring pilgrimage to the cave to pray for a good rainy season. As part of the ritual, they release into the cave’s waters a paste made of leaves, limes and the roots of the barbasco plant.  As it turns out, barbasco root is toxic to fish.  So a little while after they release the paste, dead fish start appearing on the water’s surface.  The fish are seen as a blessing from their god for their devotion. 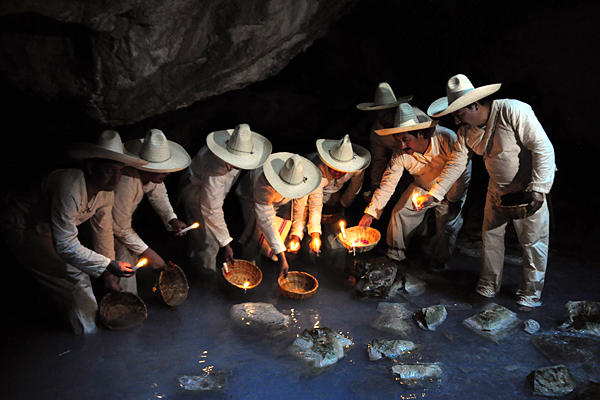 What the Texas A&M team did was collect mollies from the cave and compare them to mollies collected from different areas.  When the fish were exposed to the barbasco root toxin, the sacred cave fish had a much higher survival rate than the control fish.   The cave-fish had been selectively pressured such that the ones that could endure the toxin and reproduce survived and the ones that couldn’t became dinner.

Now, this sort of selective adaptation can be created in the lab for microbes and things that have short generational cycles, but it’s been harder to demonstrate for bigger, longer-lived, and more complex vertebrate organisms like fish.  But here, there was an isolated fish population and a selective pressure that had been going on long before the Europeans arrived in the New World.

See? It all works out

Sadly, a couple of years ago, the Mexican government made the Zoque people halt their ceremony and now they only get to perform a “faux” one (without the toxic root) each spring.  If that ban stays in place, we’ll have to check back in another 500 years or so to see if there’s been any drift in the population.