Think way back into the late 1990s when M. Night Shyamalan made The Sixth Sense and everyone got creeped out and was wowed by the surprise ending.  In my mind, when someone says, “plot twist” that’s what I think of.  Which brings us to the next question in the 30 Days of Books list:

Day 27 – The most surprising plot twist or ending

Of course, The Sixth Sense was a movie*, so that’s not really an option here, but thinking on how Shyamalan’s career started and peaked with that movie (I liked Unbreakable and parts of Signs, but let’s face it, everything afterwards was pretty dreadful), made me think of an author that followed sort of a similar career arc – though I’m afraid we’ll have to use the Wayback Machine for even a little longer to get to him.

Scott Turow’s first book, Presumed Innocent, was a first-rate murder mystery and legal thriller. Published in 1987, the story revolves around prosecutor Rusty Sabich who is implicated in the murder of his colleague (and former lover) Carolyn Polhemus. The book is a good page-turner and as a reader you’re fairly-but-not-completely sure that Rusty is being falsely accused. Finding out what really happened was one of those great “no way!” moments and was skillfully executed. 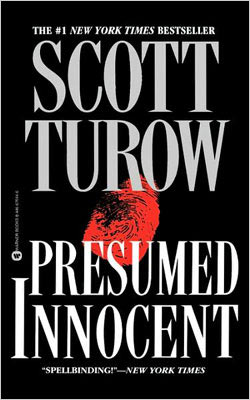 Sadly, like Shyamalan, Turow followed that up with a pretty good effort, The Burden of Proof, and then descended into mostly forgettable courtroom potboilers.  Still, even neither of them can manage to reach the heights of their early successes, they’ll still have a place in my heart.  Because, really, one of the great joys of reading a mystery is trying to try and figure out what’s going to come — and that joy and surprise of being skillfully out-witted is all too rare.

*and we can’t use tv either, which means that I also have to forego the best one of the last decade: “We have to go back, Kate! WE HAVE TO GO BACK!”