No, not the UFOs* in your Aunt Gladys’s jello mold. And not the artisanal** foie gras, goat cheese, truffle, water chestnut, actual chestnut and quinoa stuffing from Saveur magazine, but mystery-thrillers.

You see for me, mysteries are the palate cleansers of books. After I’ve read something deep, or gotten too genre-heavy, I usually turn to a mystery-thriller for a clean slate. I can usually count on light characterization and surprising plot twists. I don’t expect a lot and so am rarely disappointed. It’s like hitting the reset button for my brain. The problem is that as books they usually aren’t serious enough or memorable enough books to warrant whole review posts.

So, since a lot of people were observing a decluttering weekend this past weekend, I’ve decided to declutter my “to review” shelf and toss out a few tasty morsels here on Thanksgiving Eve.

Ice Trap by Kitty Sewell. This book is the bizarro universe version of Northern Exposure. A physician does a sabbatical in the far reaches of Canadian sub-arctic wilderness. The problems for the doc start more than a decade later when he receives a letter from a teenage girl who claims to be his illegitimate daughter – a girl he believes he physically can not have fathered.

Ice Trap is a pretty good mystery and the unusual locale sparks up what might be blah in a more standard setting. The cover blurb makes it sound like it’s going to be a page-turning thriller, which it is not. It’s the story of a man (with the unfortunate name of Dafydd… really Kitty? Dafydd?) that digs back into a part of his past he’d rather leave buried. Two and a half stars.

Before I Go To Sleep by S.J. Watson. This mystery was almost certainly created from some sort of “what if” brainstorming session. In this case, the full question might have been: what if a person forgot all their short and mid-term memory each time they went to sleep? 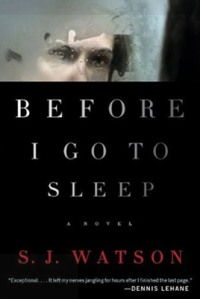 Before I Go To Sleep, by S.J. Watson

I know. Seems like a bit of a stretch. Christine is a woman that suffered a horrible accident in her late 20s and since then has a sort of awful amnesia that she can not form any memories – every day she must re-learn who she is and what her place is in the world. She is cared for by her husband, Ben, who leaves handy post-its around the house to help her (I kept thinking of Guy Pearce in the film Memento).

As Christine struggles, she is met by a psychiatrist (hers, but of course she doesn’t remember him) who gives her a journal that she’s been writing in every day to possibly help her solidify memories – a journal that’s first page declares “Don’t Trust Ben!”

And so the mystery is afoot. During her limited “aware” time, Christine tries to piece together the fragments of her life. Should she trust her husband? Her doctor? And what about her absentee best friend?

When I first started the audiobook, I thought the contrived nature of the plot would wear thin, but Watson keeps the answers and new questions coming at a good pace. About 2/3 of the way through, I sort of saw how everything would unfold, which keeps me from rating it a little higher. A solid three stars.

The Bodies Left Behind by Jeffrey Deaver

I know that Jeffrey Deaver is a big name in mystery-thrillers, but this was my first read of (or in this case, listen to) any of his books. In this taut cat-and-mouse thriller, deputy Brynn McKenzie comes across what seems to be a robbery and murder in an isolated vacation home in Wisconsin. The criminals, who it becomes clear are more than just robbers, pursue Brynn and the last surviving occupant of the house across the wilderness. 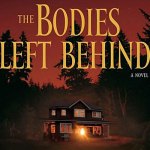 The Bodies Left Behind by Jeffrey Deaver

The cross-country chase part of the book is very well done and comes across as almost being done in real time. There is also an arc in the book about Brynn, her husband and their marital issues which I found considerably less interesting, but I suppose Deaver was looking for a way to mix up the pace and add depth, but that part fell a little flat for me.

Still – a good thriller that I have to think would make a pretty excellent movie in the right hands. Three stars.

Hold Tight by Harlan Coben. Come to think of it, I’d never read any Harlan Coben either and there was a while over the past year that it seemed like everyone I followed was talking about how awesome his books are.

Hold Tight takes place in a “typical” suburban community and focuses mostly on the family of Dr. Mike Baye. The concern of the book focuses on their teenage son Adam, who has just lost a high school friend to suicide. Adam has become secretive and distant, and naturally his parents are very concerned. They place some spyware on his computer and… and well, that’s when the mystery starts. 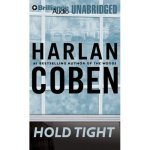 Hold Tight does a good job of capturing the modern, “normal” family – well-meaning, but slightly self-absorbed parents, kids that think they know everything, the pressures of conforming and the drive “not to get in trouble”. It’s a pretty good mystery, but I found that about half-way through I didn’t care about any of the characters. Two-plus, but not-quite-three stars.

** Can anyone tell me if the pronunciation of artisanal is art-is-SAN-al, or ar-TIS-i-nal?