While the Dordogne was rich in French history, scenic drives, gorgeous gardens, and many, many things fried in duck fat, one sunny afternoon we decided to ditch all that and head into the deep (well, sort of deep) recesses of the earth.

You see, one of the other things that this region has is caves – a lot of caves. The most famous is probably the cave at Lascaux, one of the “original” cave painting sites. It was actually pretty close to Sarlat, but we found out that in the 21st century, you don’t get to go into the actual cave but you visit Lascaux-II: a “re-construction” of the cave.  That seemed a little too Epcot-y to us, so we took a pass. And to our great dismay, guess what the only week of the year that the spotted-horses caves of Peche Merl are closed? Yep – the one we were in the south of France. C’est comme ca.

Looking a little further down the list of possible cave-ish destinations, we decided to visit the Grottes de Lacave (which I probably don’t have to translate for you). This was not a prehistoric human cave, but a stalactite-stalagmite sort of cave. I was excited and The Beloved was… well, lets just say The Beloved was aware that I had spent a lot of times in gardens.

We arrived a little after 1 p.m., but like nearly everything in France, the Grottes was closed between 12 and 2. This did afford us a chance to have a lovely picnic lunch near Belcastel – and what might have be our last glimpse of sunlight… you know, if something were to go horribly wrong.

Our tour consisted of five people and a guide (which was awesome because the next tour looked like it had ~25 people in it). The guide didn’t speak a lot of English, but between him and a Swiss woman that could translate for us, we did pretty well. There was maybe a 10-minute walk into the cave proper (the tram was not working, but hardly needed).

The tour consisted of several chambers filled with stalactites (from the top), stalagmites (from the floor), and columns (connected all the way). An ancient river that flowed underground here formed the cave. The formations develop from the slow percolation and dripping of minerals into the cave. The average rate of formation is about an inch per century. It would probably go faster if they didn’t always break for lunch. 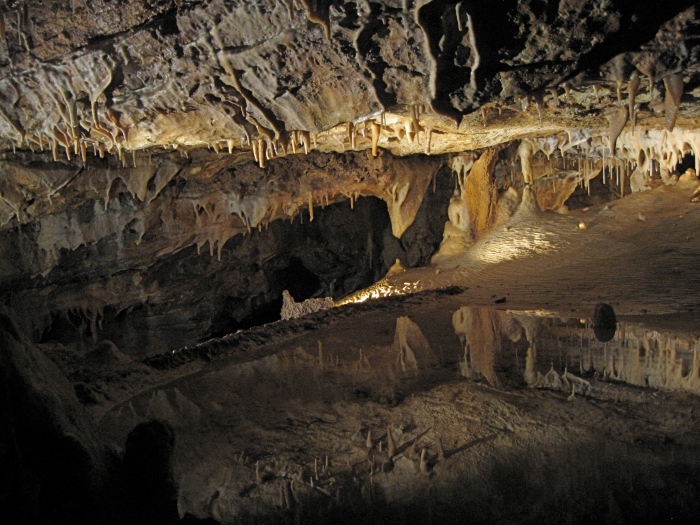 The cave itself was cool and humid and the tour was wonderful. One of the interesting formations was “The Palm”, which reminded us of home a little. 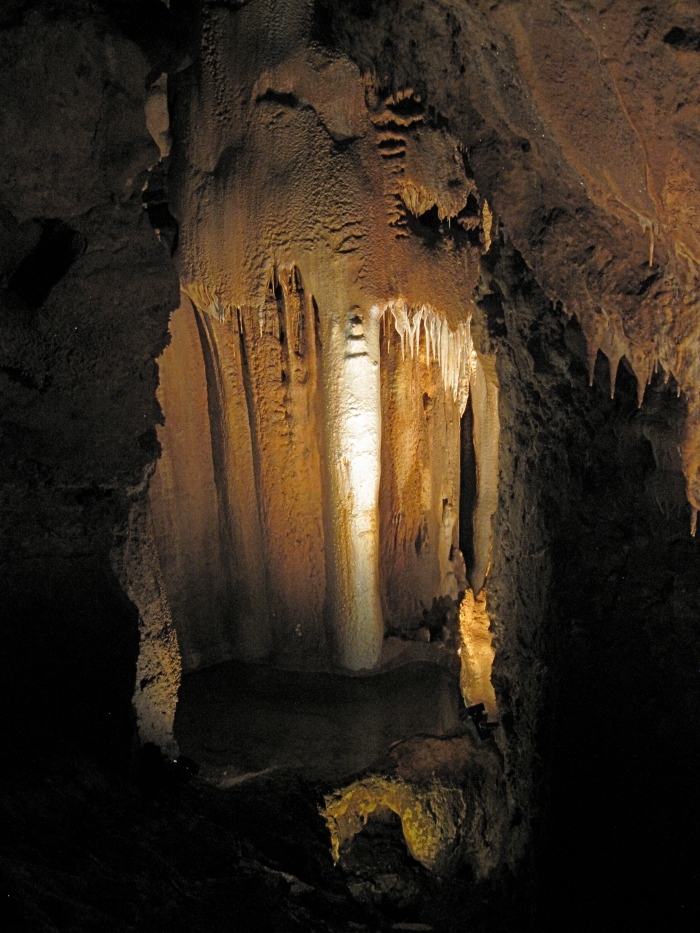 One of the neatest parts was a cavern in which there was only black-light and you could see that the stalactites were outlined in a distinct blue color and that their tips were a brilliant florescent blue. One of the people asked why the tips (where the forming drops were) were the brightest? The guide said he didn’t know, and we offered that it was likely because of differential florescent quenching because of the change in available rotational states between the liquid and solid states, but I think that got lost in translation. (Sadly, the pictures in that part didn’t turn out.)

The places in which there was standing water were really wonderful, because the reflections looked like they could have been mirrors. The pools looked as though you might have been able dive down a mile, but we were informed that they were really only an inch or two deep in most places.

After almost two hours, we did re-emerge into the bright sunlit world, but I think we both enjoyed this diversion away from knights, chateaus, and duck fat.

19 thoughts on “The French Underground”