People are almost always excited to get a new car, right? I certainly was when we got our new all-electric BMW ActiveE (christened Buzz) this past April. As I started driving around, I kept thinking of ideas for posts but decided that it would be better if I waited a little while to let the flush of new ownership fade and get a better sense of the day-in-day-out aspects of driving the car before weighing in.

So the other day, Buzz notified me that his three-month check up was due this month and that I should schedule an appointment to have him checked out. I also noticed that we’d had the car for exactly 100 days and that this seemed like a good time to reflect on how things are going, and what I’ve learned about driving an EV in general and the ActiveE in particular. 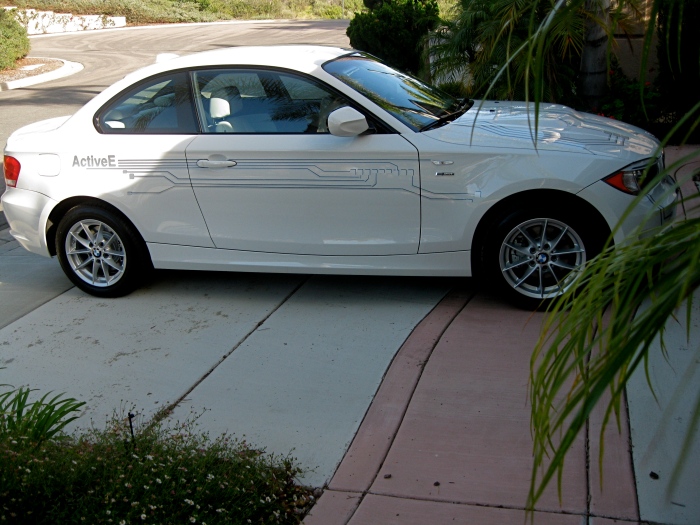 Cost.  After a couple of months of comparing power bills with Buzz to those of the previous six months, I calculate that we’re getting 1000 miles on $30-35 worth of electricity. That’s easily an 80% or greater “fuel” savings compared to my last car. That’s pretty sweet.

Range Anxiety and Use. The ActiveE is supposed to have a maximum range of 90-100 miles, which is somewhat like driving with a quarter tank of gas in a “regular” car. Now, my dad was the sort that NEVER let his car’s tank get below a quarter tank, and maybe I’ve inherited a little of that mindset, so having a short range took a little getting used to. I will say though that after a couple of weeks and going all over San Diego, we learned that we could pretty much go wherever we wanted and not worry. I drive the ActiveE to work every day and Buzz is the car we use to go everywhere on the weekend. Dog beach, Costco, out on the town, you name it. The “combustion” car always gets the weekend off.

Others’ Interest. With its decaling, the ActiveE certainly stands out in a crowd (I’ve seen four others on local roads), so I was pretty curious about whether people would be interested in it. San Diegans are pretty laid-back but I’ve fielded a number of questions. “There isn’t any gas?” “How far can you go?” “How much does a “full-tank” cost?” and “Can I get one?” have been fairly common. Most of the feedback has been positive; with maybe 1 out of 5 or 6 people seeming incredulous that you’d want a car that can only go 100 miles at a time. More common though was my interaction with one group of hipsters outside a bar who asked if it was all electric and when I said it was I was met with, “Dude, that’s awesome!” Indeed. 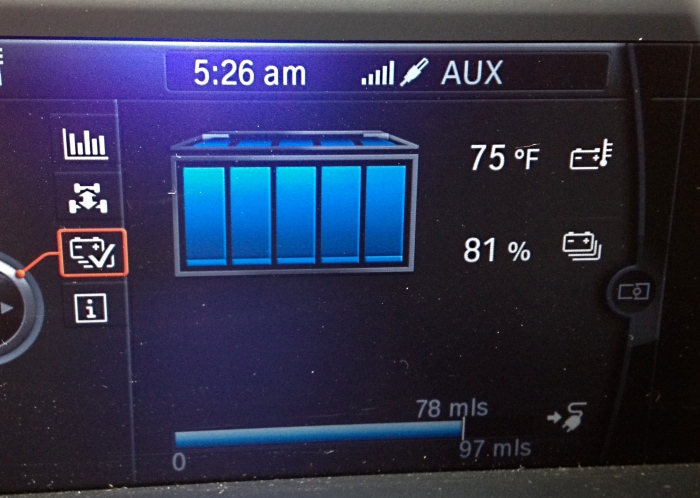 Eco-ness versus Drive-ability. One thing that I noticed was that within a couple of weeks, I was really curious to see how far I could stretch the range (the car estimates how far you could get based on your recent driving behavior). When I started, the mileage range was in the 70s. That seemed low, so I started using the EcoPro mode more, easing off the accelerator at stop lights, and taking it easy on the freeways. At one point, I got the range extended to 103 miles. I was amazed at how directly I could see how my driving habits impacted my power consumption. In some ways, it’s probably made me a better, more aware driver.

Of course though, you don’t get an electric BMW just to save on gas. The ActiveE is incredibly responsive and fun-to-drive (between The Beloved and me, Buzz is the fifth BMW we’ve had and I think it drives the best of all of them), and I’ve found that over three months I’ve settled into a somewhat balanced driving mode. My daily commute is pretty short with a lot of streetlights and I drive it pretty conservatively, doing a reasonable job of conserving charge. Then, when we’re out on the weekends, or doing something different, I’ll usually turn off the EcoPro, “open it up” a little more, and just enjoy the drive.

And yes, I do let myself indulge in a little Launch Mode fun when I get the chance. I mean, come on. Who wouldn’t?

We’re still beta-testers! The ActiveE program is a test program of 700 vehicles in the United States and our experiences driving them will be used to help design and improve the next generation of BMW electric vehicles. I’m excited to be a part of that. We’re both scientists so we love testing out new technology. But anyone who’s been part of a new technology roll-out knows sometimes there are bumps in the road. As it turns out, the day I was supposed to call for my three-month check-up appointment, I turned Buzz on and got an error message about a transmission failure. We weren’t driving anywhere. And so, Buzz made it to his check-up appointment, just not in the way we’d originally planned.

Bump in the road

So, after 100 days, I’d say we’re still pretty excited. In fact, I think the only thing that we DON’T like is that it’s only a two-year test program and we’re already lamenting the day Buzz goes back.