This was the one film in August’s list (other than the just-released Savages) that I had no previous experience with either as the novel or film. I had a vague expectation that it took place in Italy… and that there was a room… and that it likely had a view… and that it was probably some sort of love story… and… that’s it. I had no idea who was in it or what time period it took place in. I’d gotten to having a “4” as the first digit in my age without ever coming across it. 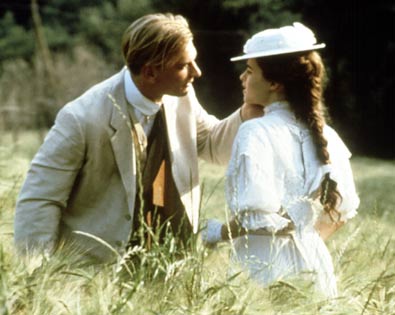 A Room With a View (Sands & Bonham Carter)

So as it began, I was surprised to see Marla Helena Bonham Carter looking not like a freak (as I’ve come to expect) but as a cream-complected English rose. And there was Maggie Smith doing a great job as always. And Denholm Elliot. And Judi Dench. And Julian Sands. And Rupert Graves. It was like the greatest BBC/Masterpiece Theater cast – ever.

I liked this film well enough – I suppose it’s quite the benchmark as period dramas go. The filming is beautiful and there is the necessary star-crossed loverness, and the retrospective Edwardian “women can think thoughts, too!” vibe, but no real worries that our protagonists wouldn’t be together by the end. 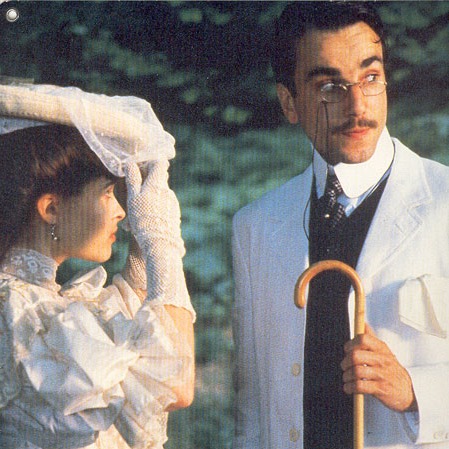 I have to say that I thought that Daniel Day-Lewis really stole the show (which is nearly impossible in a cast like that, which was hitting on all cylinders) as the uptight (and gay, he’s supposed to be secretly-but-not-secretly gay, right?) Cecil Vyse. He was absolutely pitch perfect.

Definitely an enjoyable, gorgeous film that I know I wouldn’t have appreciated in my 20s. Here’s to aging gracefully. Grade: B+

13 thoughts on “Flick Buddies: Downton Abbazia, more commonly known as A Room With A View (1986)”